Home » About Us » Patron Saint

Orthodox Christians worship the Father, Son, and Holy Spirit—the Holy Trinity, the one God. Following the Holy Scriptures and the Church Fathers, the Church believes that the Trinity is three divine persons (hypostases) who share one essence (ousia). It is paradoxical to believe thus, but that is how God has revealed himself. All three persons are consubstantial with each other, that is, they are of one essence (homoousios) and coeternal. There never was a time when any of the persons of the Trinity did not exist. God is beyond and before time and yet acts within time, moving and speaking within history. 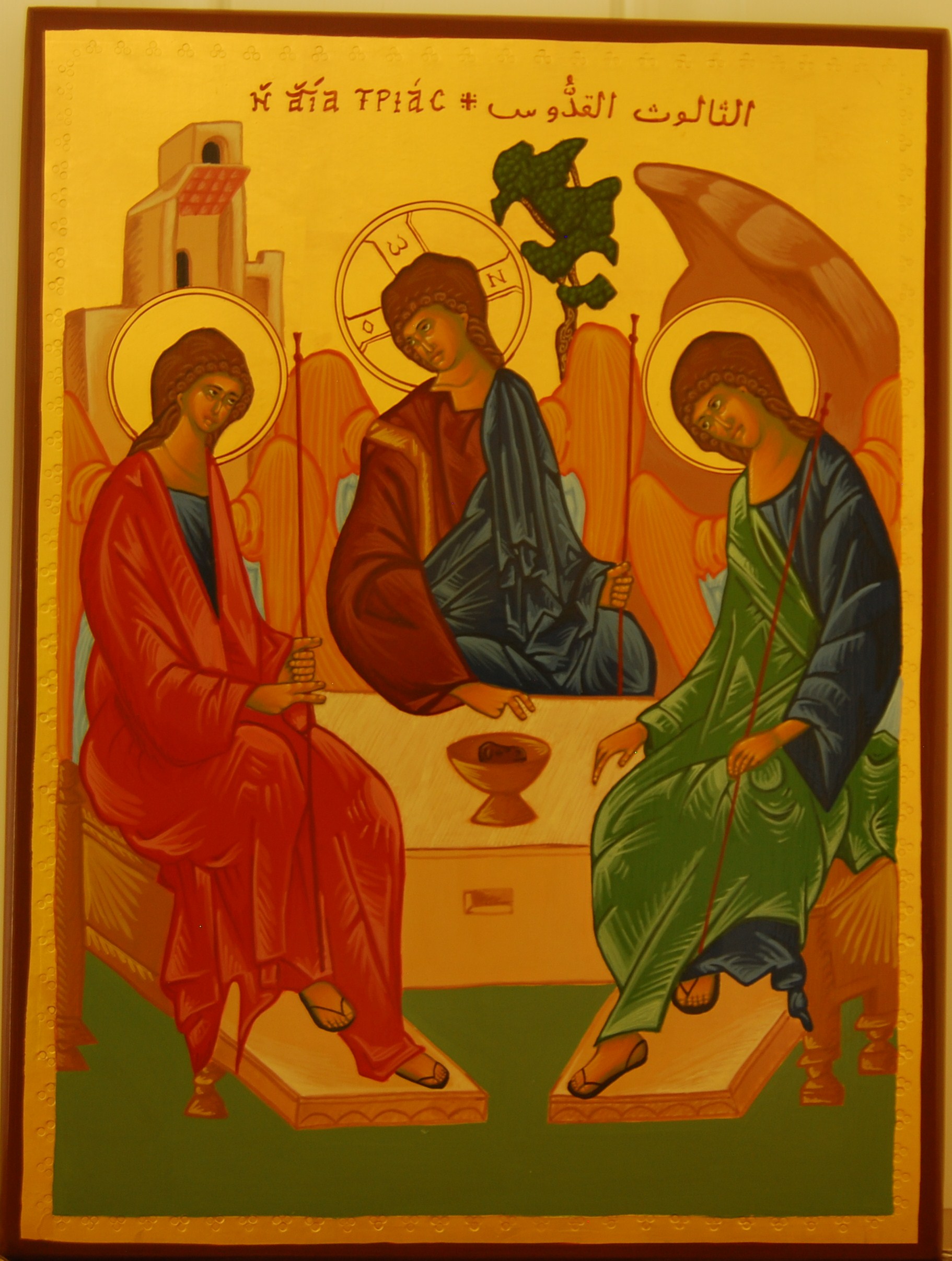 The Hospitality of Abraham, an Old Testament type of the Holy Trinity.

Explanation of the Trinity God is not an impersonal essence or mere "higher power," but rather each of the divine persons relates to mankind personally. Neither is God a simple name for three gods (i.e., polytheism), but rather the Orthodox faith is monotheist and yet Trinitarian. The God of the Orthodox Christian Church is the God of Abraham, Isaac and Jacob, the I AM who revealed himself to Moses in the burning bush.

The source and unity of the Holy Trinity is the Father, from whom the Son is begotten and also from whom the Spirit proceeds. Thus, the Father is both the ground of unity of the Trinity and also of distinction. To try to comprehend unbegottenness (Father), begottenness (Son), or procession (Holy Spirit) leads to insanity, says the holy Gregory the Theologian, and so the Church approaches God in divine mystery, approaching God apophatically, being content to encounter God personally and yet realize the inadequacy of the human mind to comprehend Him.

The primary statement of what the Church believes about God is to be found in the Nicene-Constantinopolitan Creed.

Reading: After the Saviour's Ascension into the Heavens, the eleven Apostles and the rest of His disciples, the God-loving women who followed after Him from the beginning, His Mother, the most holy Virgin Mary, and His brethren-all together about 120 souls returned from the Mount of Olives to Jerusalem. Entering into the house where they gathered, they went into the upper room, and there they persevered in prayer and supplication, awaiting the coming of the Holy Spirit, as their Divine Teacher had promised them. In the meanwhile, they chose Matthias, who was elected to take the place of Judas among the Apostles.

Thus, on this day, the seventh Sunday of Pascha, the tenth day after the Ascension and the fiftieth day after Pascha, at the third hour of the day from the rising of the sun, there suddenly came a sound from Heaven, as when a mighty wind blows, and it filled the whole house where the Apostles and the rest with them were gathered. Immediately after the sound, there appeared tongues of fire that divided and rested upon the head of each one. Filled with the Spirit, all those present began speaking not in their native tongue, but in other tongues and dialects, as the Holy Spirit instructed them.

The multitudes that had come together from various places for the feast, most of whom were Jews by race and religion, were called Parthians, Medes, Elamites, and so forth, according to the places where they dwelt. Though they spoke many different tongues, they were present in Jerusalem by divine dispensation. When they heard that sound that came down from Heaven to the place where the disciples of Christ were gathered, all ran together to learn what had taken place. But they were confounded when they came and heard the Apostles speaking in their own tongues. Marvelling at this, they said one to another, "Behold, are not all these which speak Galileans? And how hear we every man in our own tongue, wherein we were born?" But others, because of their foolishness and excess of evil, mocked the wonder and said that the Apostles were drunken.

Then Peter stood up with the eleven, and raising his voice, spoke to all the people, proving that that which had taken place was not drunkenness, but the fulfilment of God's promise that had been spoken by the Prophet Joel: "And it shall come to pass in the last days, that I shall pour out of My Spirit upon all flesh, and your sons and daughters shall prophesy" (Joel 2:28), and he preached Jesus of Nazareth unto them, proving in many ways that He is Christ the Lord, Whom the Jews crucified but God raised from the dead. On hearing Peter's teaching, many were smitten with compunction and received the word. Thus, they were baptized, and on that day about three thousand souls were added to the Faith of Christ.

Such, therefore, are the reasons for today's feast: the coming of the All-holy Spirit into the world, the completion of the Lord Jesus Christ's promise, and the fulfilment of the hope of the sacred disciples, which we celebrate today. This is the final feast of the great mystery and dispensation of God's incarnation. On this last, and great, and saving day of Pentecost, the Apostles of the Saviour, who were unlearned fishermen, made wise now of a sudden by the Holy Spirit, clearly and with divine authority spoke the heavenly doctrines. They became heralds of the truth and teachers of the whole world. On this day they were ordained and began their apostleship, of which the salvation of those three thousand souls in one day was the comely and marvellous first fruit.

Some erroneously hold that Pentecost is the "birthday of the Church." But this is not true, for the teaching of the holy Fathers is that the Church existed before all other things. In the second vision of The Shepherd of Hermas we read: "Now brethren, a revelation was made unto me in my sleep by a youth of exceeding fair form, who said to me, 'Whom thinkest thou the aged woman, from whom thou receivedst the book, to be?' I say, 'The Sibyl.' 'Thou art wrong,' saith he, 'she is not.' 'Who then is she?' I say. 'The Church,' saith he. I said unto him, 'Wherefore then is she aged?' 'Because,' saith he, 'she was created before all things; therefore is she aged, and for her sake the world was framed."' Saint Gregory the Theologian also speaks of "the Church of Christ ... both before Christ and after Christ" (PG 35:1108-9). Saint Epiphanius of Cyprus writes, "The Catholic Church, which exists from the ages, is revealed most clearly in the incarnate advent of Christ" (PG 42:640). Saint John Damascene observes, "The Holy Catholic Church of God, therefore, is the assembly of the holy Fathers, Patriarchs, Prophets, Apostles, Evangelists, and Martyrs who have been from the very beginning, to whom were added all the nations who believed with one accord" (PG 96, 1357c). According to Saint Gregory the Theologian, "The Prophets established the Church, the Apostles conjoined it, and the Evangelists set it in order" (PG 35, 589 A). The Church existed from the creation of the Angels, for the Angels came into existence before the creation of the world, and they have always been members of the Church. Saint Clement, Bishop of Rome, says in his second epistle to the Corinthians, the Church "was created before the sun and moon"; and a little further on, "The Church existeth not now for the first time, but hath been from the beginning" (II Cor. 14).

That which came to pass at Pentecost, then, was the ordination of the Apostles, the commencement of the apostolic preaching to the nations, and the inauguration of the priesthood of the new Israel. Saint Cyril of Alexandria says that "Our Lord Jesus Christ herein ordained the instructors and teachers of the world and the stewards of His divine Mysteries ... showing together with the dignity of Apostleship, the incomparable glory of the authority given them ... Revealing them to be splendid with the great dignity of the Apostleship and showing them forth as both stewards and priests of the divine altars . . . they became fit to initiate others through the enlightening guidance of the Holy Spirit" (PG 74, 708-712). Saint Gregory Palamas says, "Now, therefore ... the Holy Spirit descended ... showing the Disciples to be supernal luminaries ... and the distributed grace of the Divine Spirit came through the ordination of the Apostles upon their successors" (Homily 24, 10). And Saint Sophronius, Bishop of Jerusalem, writes, "After the visitation of the Comforter, the Apostles became high priests" (PG 87, 3981B). Therefore, together with the baptism of the Holy Spirit which came upon them who were present in the upper chamber, which the Lord had foretold as recorded in the Acts, "ye shall be baptized with the Holy Spirit not many days hence" (Acts 1:5), the Apostles were also appointed and raised to the high priestly rank, according to Saint John Chrysostom (PG 60, 21). On this day commenced the celebration of the Holy Eucharist by which we become "partakers of the Divine Nature" (II Peter 1:4). For before Pentecost, it is said of the Apostles and disciples only that they abode in "prayer and supplication" (Acts 1:14); it is only after the coming of the Holy Spirit that they persevered in the "breaking of bread,"that is, the communion of the Holy Mysteries-"and in prayer" (Acts 2:42).

The feast of holy Pentecost, therefore, determined the beginning of the priesthood of grace, not the beginning of the Church. Henceforth, the Apostles proclaimed the good tidings "in country and town," preaching and baptizing and appointing shepherds, imparting the priesthood to them whom they judged were worthy to minister, as Saint Clement writes in his first Epistle to the Corinthians (I Cor. 42).

Apolytikion in the Plagal of the Fourth Tone

Blessed art Thou, O Christ our God, Who hast shown forth the fishermen as supremely wise by sending down upon them the Holy Spirit, and through them didst draw the world into Thy net. O Befriender of man, glory be to Thee.

Seasonal Kontakion in the Plagal of the Fourth Tone

Thursday of the 11th Week

Visit the Online Chapel for more daily readings, hymns, a monthly calendar of saints and feasts, and more.